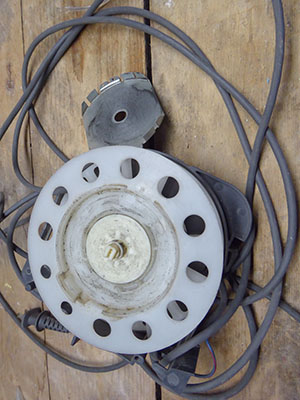 I purchased my current vacuum cleaner about twenty years ago, about at the same time as my house. It has stood me in good stead. Some number of years ago, the cord retractor stopped working almost entirely. I would have liked to leave it off for repair, since I eschew such mechanical tasks, but by that time the only service mode for such Kenmore appliances was to call into an automated voice recognition system and make an appointment for a repairman to come to my home. Automated voice recognition systems have been, in my experience, even more painful than machine repair, and the cost associated with a home service call seemed likely to approach what the appliance was worth. So, I tried the disassemble, clean and reassemble approach, with good success. After a while, the cord retractor gave out again, this time in a final way.

Twenty years' service is more than enough to get out of an appliance, so my first thought was to replace it. Initial research indicated that the replacement cost would be some $500. If I decided to switch brands and upgrade to a comparable Miele, that would take me above $1,000. That's more than I spend on anything without thinking about it, and there were some reports that the Miele vaccums died early and unexpectedly. That is the way of things electronic.

So, I ordered a replacement part for $75. Curiously, the same part fits nearly all Kenmore canister vaccuums, with some quirks in details. After some frustration with fit and associated muttering, I got the part installed and the machine reassembled. (The insides of vacuum cleaners get very dusty, you will not be surprised to hear.) Now, it works fine.

After some more shopping around, I found that the machine I purchased originally was far in excess of what I need for my floors, which have no carpet. Indeed, I could get a very serviceable model for around $200. If I had realized that at the start, I would not have spent $75 for a repair part. Oh, well, I now have a functioning vacuum cleaner – everybody should have one! – and if I have futher issues, I know how I'll proceed. 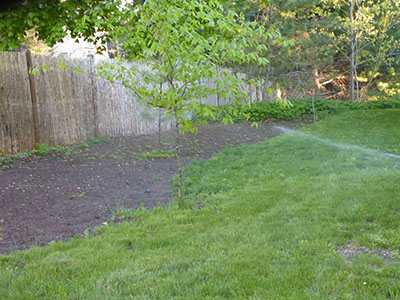 Last year, I cut down a hedge that had grown 10 to 12 feet horizontally, and dug out the stumps, which was no small task. I didn't manage to dispose of the stumps and prepare the ground for new use then, but managed to this spring.

The local town has water shortages nearly every summer, phasing in restrictions on outside water use as the season advances. This year, we've been fortunate enough to get at least a few inches of timely rain. I work to conserve water, using overall about half of my expected share. Getting growing things started is next to impossible without strategic use of water, so I will make short-term use of the resouce for long enough to get a new area of lawn established. 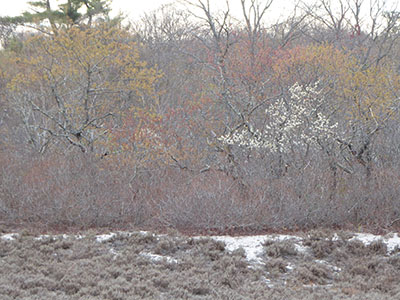 My favorite sight, of all times of the year, is the evanescence of colored buds on the trees, a pointillist haze of color that lasts for a few days.

Nobody I have met dislikes spring, even people who love winter.

T.S. Eliot wrote, April is the cruellest month. He was right, though in a different way from what he had in mind. The number of accumulated chores is amazing, between winter's damage and the phenomenal burst of growth that happens mainly in a few weeks. I recognize that the number of things I need to to is beyond what I will ever be able to manage, but I'll get enough of them done that what gets left behind will be fine. 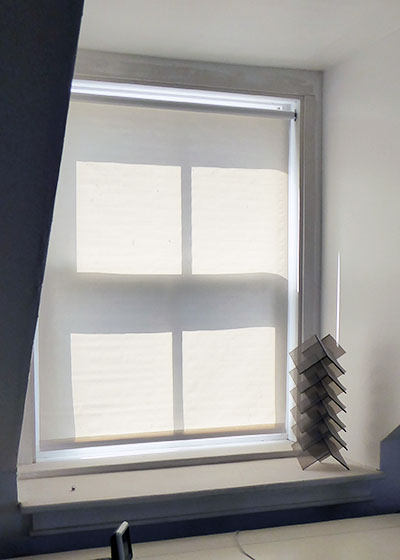 Mathematical calulation of heat loss and gain for my house matches simple direct experience: in the winter, the basement is cold and it's cold right next to the windows. In the summer, it gets very hot when direct sunlight streams through the windows.

To make a long story short, insulating the basement would not be easy because for generations plumbers and electricians have run their exposed pipes and wires along the corner between the ceiling and the walls, creating a thick obstacle course.

Shades for the windows are another matter. In the 1970s, Cambridge Alternative Power near me sold insulating shades, quilts that fit onto metal tracks and provided very good sealage against air movement. They were designed more to prevent heat loss than heat gain. I can't find such things at this time. Inexpensive window shades provide very good protection against heat gain. It seems that it might be a trivial task, in our electronic age, to have shades driven by motors, with temperature and light sensors to raise and lower them at appropriate times. But I have not been able to find such a product.

A year ago, I set out to replace and supplement the shades that I had. At the crucial moment, COVID came along. The world was in a panic. I put off many ordinary things, including buying window shades. (In retrospect, the purchase was a trivial matter that I could easily have done then, but that wasn't apparent at the time.) Recently, I got around to completing the planned purchase. The simple variety are working very well at lessening undesired heat gain, and they're not bad at reducing unwantd heat loss, either, even if there is no seal around the edges. 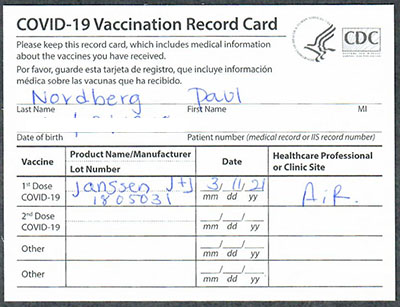 As today's media is headlining the March 2021 one-year anniversary of the COVID-19 pandemic – surely an oxymoron if ever I've heard of one! – I received a vaccination.

Why did I receive one, when others haven't? Partly, it's a matter of my fitting into the defined vulnerability classes, partly it's a matter of enfrancishement. Having worked in a health care system, I have ties, in this case just dumb electronics rather than personal. I received an email inviting me for an immunization. For my sake and the sake of people around me, I promptly accepted the invitation.

Vaccinations are not magic. It's rather like having an umbrella in a rainstorm: the umbrella won't keep your feet from getting wet, but it's far better than nothing. And if it's a stadium-sized umbrella, it protects others along with you.

It feels encouraging. I have escaped any significant personal effect of the virus, but a year without seeing people's faces or having ordinary social contact is a while. 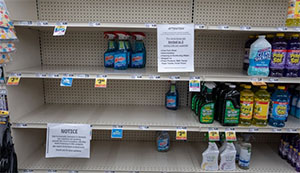 The pandemic has created odd shortages. In a way, the shortage of cleaners is understandable, as an instinct – but in practice not highly effective, since COVID transmission seems to occur far more through air-borne droplets that by surface contacts. The cleaning instinct has resulted in shortages of all kinds of cleaners, particularly in spray format.

I have been unable to find shower spray, which is not so particular a cleaner, but something that helps the soap run down off of the shower walls. After a while, I improvised my own, using household ammonia – of which there is no shortage! – and a little laundry detergent, added to water in a spray bottle. It works just as well as the commercial shower spray. In fact, it is a very good cleaner for all kinds of things.

This has led me to think about all the different kinds of cleaners there are. In my bathroom, I find that my needs are perfectly well taken care of with three items for personal care – toothpaste, body soap, and shampoo – and my homemade spray mixture. In the kitchen, I can do well with a slightly larger handful: dishwasher tablets, liquid detergent, Bon Ami (for cleaning of white things with an oxidizer), Barkeeper's Friend (for cleaning metals with a slightly acid agent), and my homemade mixture. It is truly amazing to look at all the other cleaners I have been doped into buying, which add no practical value to the fundamentals enumerated here. 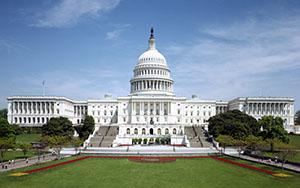 I have loved the Mall in Washington, where I grew up. The space is large, clean and inviting. Its pristineness leaves visitors (with rare exeptions) on their best behavior. Buildings such as the National Gallery of Art are open and free; you simply walk in the door and wander through, at your pleasure.

I was much saddened at recent events, just as I was at the burning of Notre-Dame de Paris – the difference being that the Cathedral event was an accident. Things won't be the same afterwards. After a few years, I imagine, the climate of D.C. will revert toward where it was until recently, but an irreversible loss of virginity has occurred.

After thinking it over for the last year, I have decided that this website is due for a makeover. Partly, that is because my life has evolved over the last six years since I started it. Partly, it is because techology has evolved, in some ways that will be of advantage to me, in others that won't, but in any case ineluctably. I do believe it will become much easier to maintain.

It will take me a while. First, I want to think about the structure and big parts, considering which have been most used and useful. Then, there will be the technical matter of executing the plan, which will be no small feat. I expect it will take me some months.

Why The Two-Party System Is Wrecking American Democracy: Other democracies are polarized, but the U.S. is unique.

Even with vaccination efforts in full force, the theoretical threshold for vanquishing COVID-19 looks to be out of reach.

… the one-popular idea that enough people will eventually gain immunity to SARS CoV-2 to block most transmission – a 'herd-immunity threshold' – is starting to look unlikely. That threshold is generally achievable only with high vaccination rates, and many scientists had thought that once people started being immunized en masse, herd immunity would permit society to return to normal.

The government set out to prop up the economy. It may also be propping up the market.

The editors of the 2021 World Happiness Report found that while emotions changed as the pandemic set in, longer-term satisfaction with life was less affected.

“What we have found is that when people take the long view, they’ve shown a lot of resilience in this past year,” Columbia University economist Jeffrey Sachs, one of the report’s co-author, said from New York.

The pandemic has frequently brought out the best in people, and sometimes less than the best.

A year into the pandemic, the evidence is now clear. The coronavirus SARS-CoV-2 is transmitted predominately by air – by people talking and breathing out large droplets and small particles called aerosols. Catching the virus from surfaces – although plausible – seems to be rare.

Unites States Department of Justice, Investigations Regarding Violence at the Capitol

The official list of arrests related to the Capitol violence is updated in real time, with copies of the details about each invididual. I have found it fascinating for its individual and collective portraits, without the layering of news reporters on top of the primary documents.

In a certain sense, the subjects mattered up to a certain point, and could be repeated, because what mattered more was the innovation in the way of interpreting them.

For millenia – and this is still true in some sections of the globe – children retraced the steps of their parents, were initiated into stable ways and ritualized routines, had a common book of knowledge and morality, and maintained a basic familiarity with place and family. Today, not only does a child face a radical departure from the past, but he must be trained for an unknown future.