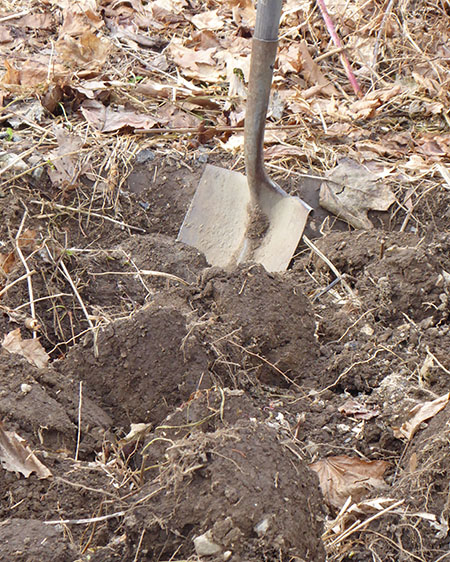 For the second year in a row, we had a hard cold snap fairly early in December, freezing the ground. Chores that I had planned to do at that time were postponed. Now, in mid-winter, we have had a relatively warm spell and the ground has thawed. I've noted warm mid-winter days before, but this is beyond a day or two. It's a warm spell… warm enough for long enough that not only the ground is unfrozen, but a lot of different kinds of green things are starting to sprout. That is not a good sign.

But for the moment, make hay while the sun shines, as the saying goes. Or, to take the view of another common saying, it's an ill wind that blows no one good (at least in the short term).

In the process of reorganizing picture files, I came across this one of my mother

in November 2013, shortly after one of the seizures she had during that period.

It was an intense time. Often it was happy, sometimes very painful. Looking at some of the pictures nearly brings tears to my eyes again, even several years afterwards.

Without any “thou shalt” moral precept, I naturally ask myself on going to bed, have you done what you were going to today, and how did it work out? – and, on waking, what are you going to do today, given your thoughts on yesterday? There is no intrinsic merit in following plans, and overdone it turns into simple compulsiveness, not an admirable trait or pattern. Something unexpected may have come up during the day, or we may come up with a better notion of what to do than we had yesterday. This should happen at least once in a while, if we’re alive and awake and aware! And yet, most often my life is not so exciting, or full of new inspiration, that it's particularly different from what I could have reasonably foreseen. (Is yours?)

I've found that very often, when it turns out that I didn‘t do something I'd planned, the reason was that I didn’t quite know how to do it. And not doing things that one doesn’t know how to do may not be such a bad thing. For me, the sense of not knowing how to do something is usually pretty tied to fear of failure. If my ignorance or inability, or worse my fears, are keeping me from getting somewhere I want to go, it’s time to think about options and approaches. Remarkably often, the obstacle can be divided into a set of sub-obstacles, all of which can be addressed with remarkable ease. A handful of key deficits can be overcome with much patience and perseverence, such as learning to make big leaps at the piano keyboard. Less often, there’s a big stone (literal or figurative) that I simply can’t move. These last events can get frustrating, unless I can identify some alternate approach – such as hiring someone who has a big machine. Simply giving up goes against the grain, and leaves me in a pet for a while.

I've been thinking harder for the last few months about matching my plans to my ability to accomplish them, and I'll probably keep thinking about that for a while longer. (For a whole year? I doubt it. Some more deserving focus will probably come along.) I do believe it's important to do things that are very difficult. Sometimes that means working daily and conscientiously, as it does with the piano. Sometimes it means finding a part of ourselves that we hadn't recognized before, which is very rewarding. It shouldn't be very often that we fail completely at something we've set our heart on. That's discouraging, and a sign that our imagination – which is a good thing – is out of touch with reality – which isn't a good thing.

After all, I said to myself, perhaps the pleasure that one has in writing is not the infallible criterion of the value of a beautiful page; perhaps it is no more than an accessory that is often added, but the lack of which does not count against it. Perhaps some celebrated works were composed in the middle of yawns.

Letter: A praiseworthy proposal… but let's all contribute

… any human thing supposed to be complete, must for that reason be faulty.

Later on, one sees things from a more practical standpoint, in full conformity with the rest of society, but adolescence is the only time when he has learned anything.